Part of my Knowledge Base.

Henceforth we’ll use the phrase “classical bit”, after “classical physics” to describe the informational unit we are familiar with in ordinary computing.

There are two special quantum states which correspond to the \(0\) and the \(1\) states of a classical bit. The quantum state corresponding to \(0\) is usually denoted \(\mid0 \rangle\). That’s notation for the following vector:

This notation with \(\mid\) and \(\rangle\) is called the ket notation, and things like \(\mid0 \rangle\) are called kets. Don’t be thrown off by the unfamiliar terminology – a ket is just a vector, and when we say something is a ket, all we mean is that it’s a vector.

The computational basis states \(\mid0 \rangle\) and \(\mid1 \rangle\) are just two possible states for a qubit. Many more states are possible, and those extra states endow qubits with capabilities not available to ordinary classical bits. In general, remember, a quantum state is a two-dimensional vector. Here’s an example, with a graphical illustration emphasizing the vector nature of the state:

Quantum states are not only two-dimensional vectors, they are complex vectors, that is, they can have complex numbers as entries. So, for instance, another quantum vector is the state:

which can be written in the conventional component vector representation as:

Recall that a quantum state is a two-dimensional complex vector. Actually, it can’t be just any vector—there’s a constraint. The constraint is this: the sums of the squares of the amplitudes must be equal to 1.

In more general states, the amplitudes can be complex numbers denoted by alpha \((\alpha)\) and beta \((\beta)\). The constraint is now that the sum of the squares of the amplitudes is 1. This is called the normalization constraint:

It’s called that because if you think of \(\mid0 \rangle\) and \(\mid1 \rangle\) as orthonormal vectors, like this: 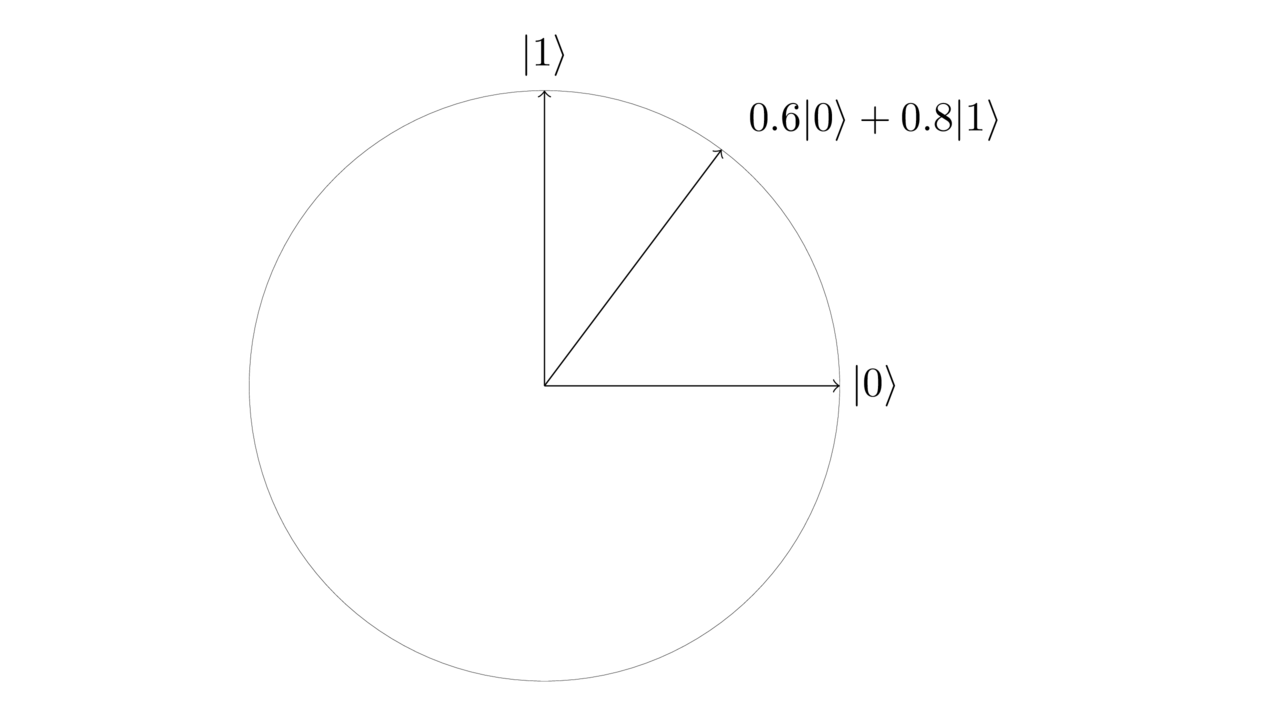 The quantum state of a qubit is a vector of unit length in a two-dimensional complex vector space known as state space.

On a computational basis, the quantum NOT gate does the same:

The computational basis states aren’t the only states possible for a qubit. When a NOT gate is applied to a general superposition state, that is, \(\alpha \mid 0 \rangle + \beta \mid 1 \rangle\), it acts linearly on the quantum state—interchanging the role of \(\mid0 \rangle\) and \(\mid1 \rangle\):

NOT gates are usually denoted by the symbol \(X\), so the above may be rewritten:

The line from left to right is what’s called a quantum wire. A quantum wire represents a single qubit. The term “wire” and the way it’s drawn looks like the qubit is moving through space. But it's often helpful to instead think of left-to-right as representing the passage of time. So the initial segment of wire is just the passage of time, with nothing happening to the qubit. Then the \(X\) gate is applied. And then the quantum wire continues, leaving the desired output.

Sometimes we’ll put the input and output states explicitly in the quantum circuit, so we have something like:

A simple multi-gate quantum circuit is shown below. It’s just a circuit with two \(X\) gates in a row:

Visualising this in a matrix representation:

Thus, this circuit would be equivalent to a quantum wire:

The first quantum gate, the \(NOT\) or \(X\) gate doesn’t do much more than what is possible with a classical NOT gate. Let’s explore the Hadamard gate. Denoting the gate by \(H\):

So the way a quantum computation works is that we manipulate a quantum state using a series of quantum gates, and then at the end of the computation (typically) we do a measurement to read out the result of the computation. If our quantum computer is just a single qubit, then that result will be a single classical bit. If, as is more usually the case, it’s multiple qubits, then the measurement result will be multiple classical bits.

It’s a single-qubit quantum circuit, with input the state \(\mid \psi \rangle\). A \(NOT\) gate is applied, followed by a Hadamard gate. The circuit finishes with a measurement in the computational basis, denoted by the slightly elongated semi-circle. The \(m\) is a classical bit denoting the measurement result – either \(0\) or \(1\) – and we use the double wire to indicate the classical bit \(m\) going off and being used to do something else.

We now know about the NOT and Hadamard gates, and also about the measurement process that can be used to extract classical information from our quantum circuits. In this section, let’s return to quantum gates, and take a look at the most general single-qubit gate. To do that it helps to recall the matrix representations of the NOT and Hadamard gates:

A general single-qubit gate works similarly. In particular, a general single-qubit gate can be represented as a \(2 \times 2\) unitary matrix, U. If the input to the gate is the state \(\mid \psi \rangle\) then the output from the gate is \(U \mid \psi \rangle\). And so the NOT and Hadamard gates correspond to the special cases where \(U = X\) and \(U = H\), respectively.

The \(\dagger\) is also sometimes called the dagger operation, or *Hermitian conjugation, or just the conjugation operation. We’ll use all three terms on occasion.

As well as the \(X\) gate already introduced, there are \(Y\) and \(Z\) gates which, combined with the \(X\) gates, are collectively known as the Pauli matrices. These are useful tools in our quantum gate toolkit and they expand the repertoire of moves we have available to us. They’re crucial, for example, in protocols such as quantum teleportation and quantum error correction.

Another good example of a quantum gate is a rotation, the kind of matrix you’ve most likely been seeing since high school. It’s just the ordinary rotation of the 2-dimensional plane by an angle \(\theta\)

Not only are gates unitary, to ensure that states remain normalized; also, quantum states are normalized, since measurement probabilities must sum to 1. It all fits together. In fact, it turns out that unitary matrices are the only matrices which preserve length in this way. And so a good way of thinking about unitary matrices is that they’re exactly the class of matrices which preserve length. That’s the geometric interpretation (and intuitive meaning) of the algebraic condition \(U^{\dagger}U=I\)

We’ve developed most of the ideas needed to do universal quantum computing. We understand qubits, quantum states, and have a repertoire of quantum gates. However, all our gates involve just a single qubit. To compute, we need some way for qubits to interact with one another. That is, we need quantum gates which involve two (or more) qubits.

An example of such a gate is the controlled-NOT (or CNOT) gate. In the quantum circuit language we have two wires, representing two qubits, and the following notation to represent the CNOT gate:

The four computational basis states, corresponding to the four possible states of a two-bit system, are:

And, for a two-qubit system, not only can we have those four states, we can also have superpositions (i.e., linear combinations) of them:

The amplitudes \(\alpha, \beta, \gamma, \delta\) are just complex numbers, and the sum of the squares of the absolute values is 1. This is the same kind of normalization condition as we had for a single qubit.

The CNOT gate operates very simply. If the control qubit is set to 1, as in the states \(\mid10\rangle\) and \(\mid11\rangle\), then it flips (i.e., NOTs) the target qubit. And otherwise it does nothing. Writing out the action on all four computational basis states we have:

The CNOT can be thought of as a very simple kind of if-then statement: if the control qubit is set, then NOT the target qubit. But while simple, it can be used as a building block to build up other, more complex kinds of conditional behavior.

Of course, the CNOT doesn’t just appear in two-qubit computations. It also appears in computations involving more qubits. Let’s suppose we have three qubits, for instance, and computational basis states such as \(\mid 000 \rangle\), \(\mid 001 \rangle\), and so on. Here’s a CNOT with the second qubit as the control qubit and the third qubit as the target:

CNOT has been described as a “classical” gate, but it can be combined with single-qubit gates to do non-classical things. An example is the diagram below, a two-qubit computation starting with the \(\mid 00 \rangle\)computational basis state and applying a Hadamard gate to the first qubit, and then do a CNOT:

This output state is a highly non-classical state – it’s actually a type of state called an entangled state. There’s no obvious interpretation of this state as a classical state, unlike say a computational basis state such as \(\mid 00 \rangle\). In fact, entangled states can be used to do all sorts of interesting information processing tasks, including quantum teleportation and fast quantum algorithms.

We can summarize the three steps in a quantum computation as follows: